Erin and I quit our safe, steady-paying organizer gigs over a year ago to found HearYourselfThink because we realized then that the relentless flood of misinformation, conspiracy theories, and raw irrationality gushing from talk radio, hyper-partisan media outlets, and internet echo chambers was destroying our democracy and driving our nation to the brink of disaster. As it turns out, (Fmr.) President Obama agrees with us: 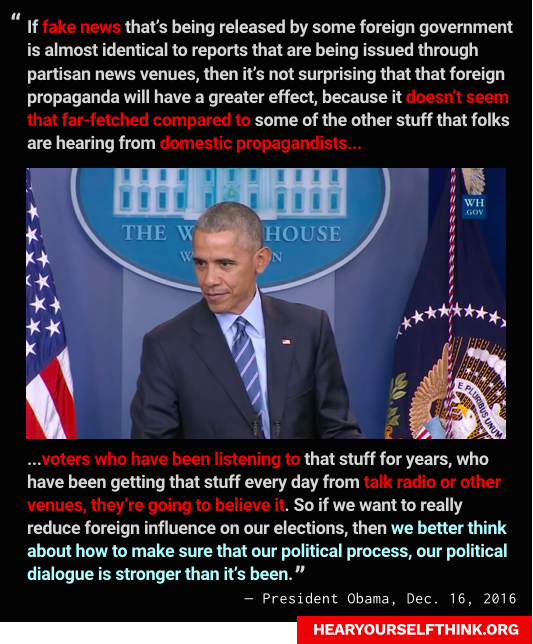 Everyone’s now talking about the threat of fake news and how Trump’s election ushered in a “post-truth” era where reality no longer matters and, according to this Trump surrogate, facts have literally ceased to exist:

“There’s no such thing, unfortunately, anymore as facts…”

Here’s the thing though: no matter how much the likes of Alex Jones, Sean Hannity, and Donald Trump may want to remake the world in their sociopathic image – a world where truth is irrelevant and you just make sh*t up as you go along to suit your agenda – reality is still real, facts still matter, and lies are still lies no matter how often they are repeated.

We worked like heck and logged a lot of miles (4,000!) in 2016 to expose right-wing media and wake people up to the threat it posed. We also trained hundreds of people on how propaganda brainwashes and how to begin to deprogram others from its influence.

Erin and I are all the more dedicated to working to reclaim America’s brain with a lot simmering on the stove already for early in 2017. But if we are going to be able to keep up this critical work to #MakeAmericaThinkAgain we need supporters like you to step up now.

If we don’t receive sufficient investment from supporters who understand the need to fight for truth and reason in the new year, we will not be able to continue our efforts. Our spunky, 2005 Ford Focus can only hold out so long after the beating it took last year as we traveled all over Pennsylvania and into Ohio with our prescient message about the danger to our democracy of propaganda and fake news posing as real news.

You can help by making a contribution below — and, if you attended one of our trainings in the past year, giving us your feedback on how it helped you get a better handle on the right-wing media problem.  We are counting on your ideas, talents, energy and support to make 2017 one hell of a lot better than 2016!

← Howling at the Moon in Moon, PA: Media-Driven Satanic Panic Fuels Hillary Hatred at Trump Rally After the Marches, Keep on Walking the Walk to Defend Democracy →