The “War on Christmas” is Really the War on Dickens

The “War on Christmas” is really the War on Dickens…or…how to fashion a blunt instrument out of a season of cheer, charity, and goodwill and use it to bludgeon your political opponents.

In his book The Man Who Invented Christmas, popular historian Les Standiford tells how Charles Dickens, with the creation of A Christmas Carol in 1843, helped rejuvenate the wide-spread celebration of the holiday in England and infused the yuletide with a new spirit of universal goodwill and solidarity between all human creatures; a spirit arising from a visceral, common human experience of frailty, mystery, and mortality.

Consider this impassioned entreaty from the young nephew to his stone-hearted old uncle Scrooge from the first “stave” of A Christmas Carol:

“But I am sure I have always thought of Christmas time, when it has come round—apart from the veneration due to its sacred name and origin, if anything belonging to it can be apart from that—as a good time; a kind, forgiving, charitable, pleasant time; the only time I know of, in the long calendar of the year, when men and women seem by one consent to open their shut-up hearts freely, and to think of people below them as if they really were fellow-passengers to the grave, and not another race of creatures bound on other journeys.”

This is precisely the spirit that the propaganda machine responsible for Trump’s political rise could not abide, and was bound to poison and kill at all costs. The stoking of petty grievance; aversion to introspection; and the fanning of smoldering resentment into the flames of bigotry and hatred are the very life-blood of its operation and profitability.

How could it sit by and acquiesce to weeks at the waning of every calendar being given over to general benevolence, fellow feeling, and resolutions of renewed brotherhood for the new year coming? It could not. So it thought up a lie and it thought it up quick.

Actually, the framework of divide-and-destroy was, of course, already very much in place and only needed to be applied to the mission of blowing up the Dickensian vision of Christmas and replacing it with something decidedly more Lizard Brainy — Have Yourself an Amygdala Little Crisis.

The minds of Fox and talk radio consumers have been deluged with lies and inflammatory narratives contrived to quash the expansive spirit of Dickens and twist Christmas into a scorched and shriveled cultural turf.

Turf they are told that is relentlessly under attack by godless, liberal hordes who fail to see the sacrilege inherent in a beleaguered, minimum wage retail worker cheerily saying “Happy Holidays” or the righteousness inherent in an angerball spitting the words “Merry Christmas” at you like a viper spits venom. 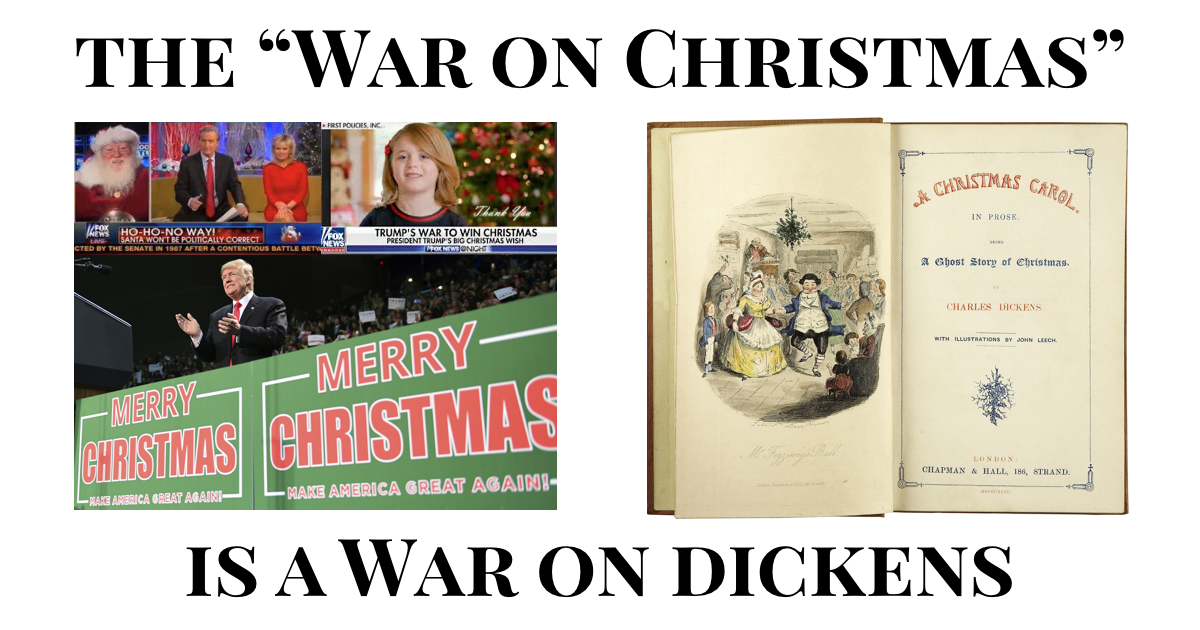 But what motivates the propaganda noise-machine’s campaign of destruction is not just antipathy to the heartfelt message of decency, simple joy, and compassion expressed in A Christmas Carol. What it despises even more, as a force dedicated to deception, discord, and division, is the message of redemption through self-reflection, determined searching of the heart, and confrontation with immutable truth:

“‘Forgive me if I am not justified in what I ask,’ said Scrooge, looking intently at the Spirit’s robe,’ but I see something strange, and not belonging to yourself, protruding from your skirts. Is it a foot or a claw.’

‘It might be a claw, for the flesh there is upon it,’ was the Spirit’s sorrowful reply. ‘Look here.’

From the foldings of its robe, it brought two children; wretched, abject, frightful, hideous, miserable. They knelt down at its feet, and clung upon the outside of its garment.

They were a boy and a girl. Yellow, meagre, ragged, scowling, wolfish; but prostrate, too, in their humility. Where graceful youth should have filled their features out, and touched them with its freshest tints, a stale and shriveled hand, like that of age, had pinched, and twisted them, and pulled them into shreds. Where angels might have sat enthroned, devils lurked, and glared out menacing. No change, no degradation, no perversion of humanity, in any grade, through all the mysteries of wonderful creation, has monsters half so horrible and dread.

Scrooge started back, appalled. Having them shown to him in this way, he tried to say they were fine children, but the words choked themselves, rather than be parties to a lie of such enormous magnitude.

‘Spirit. are they yours.’ Scrooge could say no more.

‘They are Man’s,’ said the Spirit, looking down upon them. ‘And they cling to me, appealing from their fathers. This boy is Ignorance. This girl is Want. Beware them both, and all of their degree, but most of all beware this boy, for on his brow I see that written which is Doom, unless the writing be erased. Deny it.’ cried the Spirit, stretching out its hand towards the city. ‘Slander those who tell it ye. Admit it for your factious purposes, and make it worse. And abide the end.’

‘Have they no refuge or resource.’ cried Scrooge.

‘Are there no prisons.’ said the Spirit, turning on him for the last time with his own words. ‘Are there no workhouses.'”

Truth and the fruits of truth in the human spirit are what the propaganda noise machine hates and fears the most.

Let’s enter the new year resolved to revive a spirit of truth in the land that recalls our values, is focused on the struggle of the moment, and carries the hope of what the future will hold when we depart, as one people, from the ways that have led our democracy to the brink of annihilation.

If you’re so moved to support us in this important work, please give what you can here. Or sign up to take our training in 2018:

← After the Marches, Keep on Walking the Walk to Defend Democracy